With the sudden popularity of the Netflix movie “The Queen’s Gambit,” based on the 1983 Walter Tevis novel, I thought I’d share this piece I wrote called “The Reno Chess Club.” It was published in the Delmarva Review Vol. 5, No. 1, pp. 32-33 (2007) and describes an experience I had 30 years ago.

With its world class casinos and proximity to Lake Tahoe and the Sierra, the city of Reno has a well-deserved reputation as an entertainment and recreational destination. Ask anyone about Reno and they’ll tell you that the place is also known for airplane races, hot air balloon ascents, chili cook-offs, bowling tournaments, wedding chapels, classic car shows, and big-time rodeos. Surprisingly, this city of quick money and quick marriages is also home to the slow and cerebral game of chess.

Soon after moving to Nevada [in 1991], I read in the Reno newspaper about an upcoming chess tournament [the Western States Open]. This was no ordinary tournament where a local club sets up rows of boards on the long tables of a school cafeteria. Instead, the venue was the elegant salon of one of Reno’s biggest casinos. What’s more, the ad said that this was a nationally ranked tournament and some of the country’s best players—chess masters and grandmasters—were expected. I hadn’t thought abut this game in years; probably not since the sensational 1972 Fischer-Spassky world championship match, so I decided I’d go just to watch.

The scene was surreal, for a casino that is. Absent were the blinking lights, the tinny staccato of paying slots, the echoed call of “Keno,” and the crowds. The large room was well lit and nearly silent, and with the tournament already underway when I arrived, there was little motion. Spectators like myself looked on from the sidelines as players, many with head in hands, focused their gaze on the opposing armies before them. At each board, minutes would go by until one player made a move, hit the button on a small dual-faced clock that kept track of elapsed time, and then recorded the move in chess notation on a small spiral-bound tablet.

The elite grandmasters played in a special cordoned-off section at one end of the room. These were the stars of the show, and their games were displayed, move by move, on a large vertical board behind each pair of players. I noticed the person next to me had a compact chess set that he used to follow the game of his favorite grandmaster. Everyone stood in silence out of respect because chess is a game of concentration. Those who wanted to discuss games in progress left the room, and, even then, spoke in whispers. Chess is a wonderful spectator sport, but the fans are of a different sort; their enthusiasm is expressed in hushed tones.

That Reno chess tournament rekindled my interest in the game. I was pretty good once. In fact, I held the titled of middle school champion and still have the plaque that Mr. Ginsburg, our gym teacher, made for me. I joined the Reno Chess Club confident that I would soon emerge as its top player, but after a few games I knew the strength of my opposition; I was not the one uttering that potent word “checkmate!” The club president consoled me with one of his favorite sayings: “Win a game, give a lesson: Lose a game, get a lesson.” I got plenty of lessons at the Reno Chess Club!

Last Friday, Oct. 16th, was my Book Launch for Wicked Virginia City, and it was only fitting that it took place in Virginia City, Nevada. More specifically, at the Canvas Cafe, an artsy-with-Western-vibe eatery on historic C Street. Here’s the author posing on the sunny east-facing front porch. A good time was had by all (mindful, of course, that we’re in the midst of a pandemic).

Well, here it is. I finally got the cover (front, spine, back) from The History Press. Wicked Virginia City will be published Oct. 5, 2020, For those who judge a book by its cover, here you have it. I love it, especially how the caricature of Sen. William Stewart is almost pointing to my name as author. Ha! 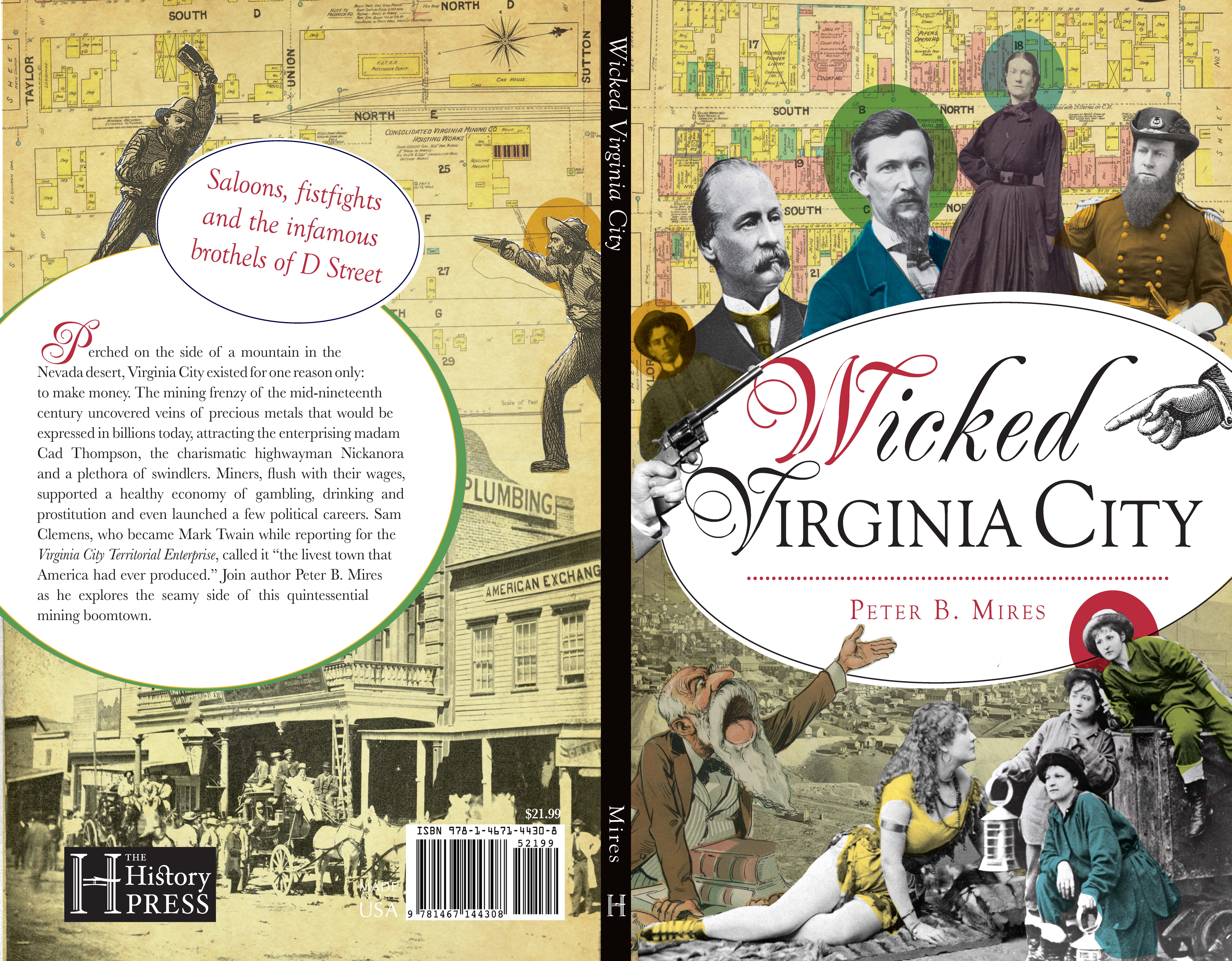 This 1876 illustration by T.L. Dawes always reminds me of an Ant Farm; a subterranean profile of tunnels filled with industry. Something else it reminds me of is the source of all that timber; the interlocking blocks—called square sets—strong enough to support the roof and side walls of these manmade caverns. Dan De Quille knew where the timber came from: the old-growth forest of the Tahoe Basin. He explained in The Big Bonanza (1876), “The Comstock Lode may truthfully be said to be the tomb of the forests of the Sierras.” (Image courtesy of the Library of Congress.)

In the 1980s I lived in Louisiana and developed a passion for Cajun cuisine. (Yes, Tabasco is a major food group.) I now live in Nevada where good gumbo, jambalaya, and crawfish etouffee are scarce as hen’s teeth. The solution: make it yourself with the help of the Mosquito Supper Club (published April 21, 2020), and, as they say down on the bayou, “laissez les bons temps rouler.”

I love this caricature of William M. Stewart addressing the U.S. Senate. The lawyer-turned-politician made a pile of money from Virginia City mining-claims litigation, and then served as a U.S. senator from Nevada for nearly 30 years. Unlike today, members of congress did not have a staff and often hired newspaper reporters willing to moonlight. Enter Mark Twain. Twain worked for Senator Stewart for a time, and later used his experience as fodder for his book “The Gilded Age” (1873). Mark Twain did not have a very high regard for elected officials, as is evident from this quote: “Suppose you were an idiot. Now suppose you were a member of Congress. But I repeat myself.” (Image courtesy of the Library of Congress.)

Yesterday I spoke to about 75 members of the Tahoe Douglas Seniors at Harveys Hotel-Casino. I don’t think my name was up on the marquee, however.

If you’ve ever wondered what our domesticated animal companions are thinking, Skip, a Timber Wolf-Labrador mix, will amaze and enlighten you. He’s the protagonist in Teri Case’s latest novel In the Doghouse. Without offering a spoiler-alert caveat, I can tell you the book’s subtitle, “A Couple’s Breakup from Their Dog’s Point of View,” is the perfect summary. Needless to say (but I’ll say it anyway), the title is a play on words. Someone’s in the doghouse, the Chateau Bow Wow, and it isn’t Skip, although he may at times have reason to tuck his tail between his legs.

In the Doghouse has a wider cast of characters, human and nonhuman alike, and one common denominator is their need to belong—from the stray in the pound waiting to be adopted to the aforementioned couple post-breakup. Skip is the personification of this need to belong and feel loved. It’s in his DNA. Wolves mate for life and are social animals. Belonging to a pack is happiness, while its loss is the opposite of happiness.

At one point early in the couple’s breakup, Skip, left alone in the apartment, begins to howl for the return of his pack. After getting that out of his system, he begins to take matters into his own paws. It’s not all a romp in the dog park as he and Lucy, a busy RN who got de facto custody of Skip, reconfigure their lives.

In the Doghouse is a love story, with Skip’s unconditional love a constant throughout. It challenges the notion that pets are owned and somewhat removed from the complicated lives of their human masters. Skip is perceptive way beyond his keen sense of smell. He knows what Lucy and others are thinking and feeling and what makes people happy, as exemplified by the doga class he and Lucy start taking together.

Teri Case has written a doggone good tale. I’m certain my grandfather, a veterinarian for forty-five years, would have loved it. He knew in his heart that dogs are wiser than people, which is my In the Doghouse take-away.